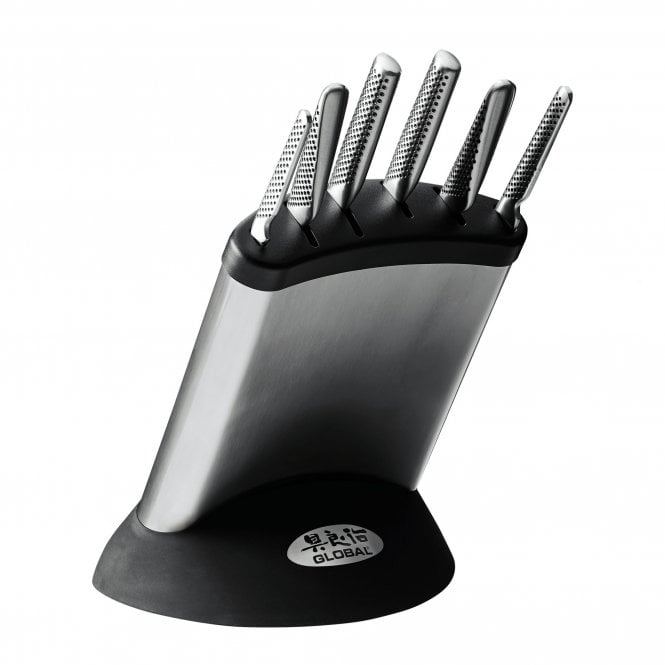 Product Code: 6-636/7B
Item in Stock Item out of Stock | Usually dispatched within 24 hours
Order within for next day delivery on Thursday 3rd December
Loading...

If you needed just one knife for your kitchen go for a quality chefs knife and if you are going for Global buy the G-2. The G-2 is the best-selling Japanese kitchen knife ever made! It can slice, dice, chop, and really do anything that you need. A multi-purpose all round blade that is included in virtually every knife set produced. It has won dozens of awards over the years testifying to the popularity of the blade.

The G-9 is Global's classically shaped bread knife. It is a specialist knife, really for use with bread only. The teeth are made to saw through the crust of bread but could also be used for some tough meats, for example crackling. The funny thing is, the Japanese do not really eat bread and so it is one of those products that they never really understood! If you look closely at the knife blade you will see that on the face of the knife, the teeth have a chamber whilst on the back of the knife, the face is flat. When you cut into bread, you will automatically cut inwards in a curve rather than straight down and the chamber is there to help correct this so that your slicers will be more of a similar thickness all the way through. Whilst the G-9 can be used by left handers, the set up is right handed.

The GS-11 is one of the more popular knives in the Global range and is frequently found in many of the sets where it fills the role of filleting, carving and 'general purpose' knife, hence its name. The GS-11 has a medium sized blade at 11cm which is good for filleting small fish such as sea bass. The blade is also flexible which makes it suitable for this purpose.

The GSF-15 is the most popular petty knife in the Global range and is very often found in set combinations. Its little 8cm blade is good for all those small kitchen tasks, peeling, cutting fruit and small delicate kitchen work. This knife can cover all the tasks of the other GSF range and is a classic all-rounder.