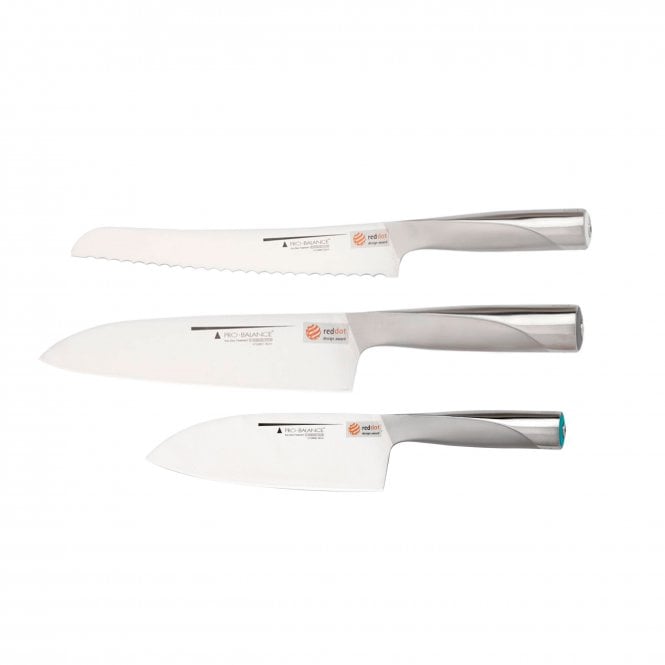 Product Code: PB-857/855/889
Item in Stock Item out of Stock | All orders placed up to Midday will be dispatched for delivery the next working day
Want it delivered ,Thursday 20th January? Order in and choose at checkout.
Loading...

Pro Balance Knives are revolutionary in concept and design. All Pro Balance Knives feature a hollow handle which can be opened to customise the weight by adding or removing small weights. If you like the sharpness of a true Japanese knife, but hate the weight of most Japanese knives, simply add in the included weights into the handle. By shifting the weights forwards or backwards you can alter the centre of balance of the knife which will either aid a pinch or hammer grip. The knife itself is no gimmick though and has an all S/S design and structure. The blade undergoes sub-zero treatment during the tempering stage to create an incredibly strong blade (made from German 1.4116 steel) with a +55 HRC rating, and hand sharpened to rival any Japanese brand. The knives slice through food effortlessly and all come with a special coloured end cap so you can tell which knife is which in the block. Always wash your knives by hand; dry thoroughly and never put them in a dishwasher. Knives should be stored in a block or other protective case to protect the blades and always kept out of reach of children.

It is a specialist knife, really for use with bread only. The teeth are made to saw through the crust of bread but could also be used for some tough meats, for example crackling. The funny thing is, the Japanese do not really eat bread and so it is one of those products that they never really understood! If you look closely at the knife blade you will see that on the face of the knife, the teeth have a chamber whilst on the back of the knife, the face is flat. When you cut into the bread, you will automatically cut inwards in a curve rather than straight down and the chamber is there to help correct this so that your slicers will be more of a similar thickness all the way through.

As a chef's knife it can be used for a variety of kitchen tasks, such as slicing, cutting and chopping and is very much the go to knife in the series.

Santoku is a Japanese word literally meaning 'three ways' and is used to describe the three cutting tasks that the knife is designed to do; slicing, dicing and mincing. The shape of the knife makes it great for a Western type of cooking because the blade is flat, deep and strong, which makes the knife brilliant for cutting up lots of heavy root vegetables, such as potato, parsnips and ginger.