Recipes for breading and frying meat exist universally, wherever you find yourself during travels. Breaded meat holds a special place in the hearts of foodies everywhere. From US southern states having the chicken fried steak (aka the country fried steak) to the German-speaking world having the Schnitzel, to Japan having its fabled Chicken Katsu, each continent puts its own spin on this home-style classic.

But even before all the aforementioned delectable breaded dishes bubbled to the surface of the culinary world, there was the original – the Italian Cotoletta. A famous dish from the Lombardy region of Italy, and a symbol of their regional cuisine. Originally made from veal loin, the recipe has come leaps and bounds since its inception.

To this day, there are still protracted disputes between Italians and Austrians over who invented the first breaded cutlet of meat. The breaded meat wars pit the Cotoletta vs. the Schnitzel.

Major differences indicate the cotoletta containing parmesan in its bread mixture and usually with the veal bone-in, with the Schnitzel having neither. We all know that neighbours with a longstanding history like to squabble. Then again who wouldn’t want to be crowned the inventor of one of the best breaded dishes…ever.

Italians will normally dispel the myth that their northern neighbours invented the first breaded cutlet, with evidence suggesting that they’re ancestors, the Romans, consumed meat cutlets coated in bread crumbs as far back as the 1st century BC. Mic drop.

A descendant of the Cotoletta, that many may have heard of is the South American ‘Chicken Milanese’. With the name reflecting the original Milanese recipe of ‘cotoletta alla Milanese. The historian Pietro Verri documents in his book titled “History of Milan”; the first appearance of the ‘cotoletta alla Milanese was during a banquet organised by monks in 1134 to honour the memory of Saint Ambrogio, the protector of Milan.

The cotoletta recipe was brought over to Latin America by Italian immigrants during periods of mass migration from Europe to the Americas from the late 19th century and early 20th century.

Other variations of the cotoletta include the sandwich version, the indulgent Bologna pork version (covered with cheese and ham and meat sauce, and finished into the oven). The cotoletta is a curious tale of an amazing template of a recipe being readily absorbed by almost any region or culture that comes into contact with its existence.

Today we dive into the recipe of the chicken variation of the cotoletta.

Set aside for 1 hour.

Place on kitchen towels to soak up the oil and set aside.

Bringing it all together:

The Masahiro Santoku Knife is a brilliantly versatile mid-sized knife for multi-purpose work. Santoku is a Japanese word literally meaning ‘three ways’ and is used to describe the three cutting options that the knife is designed to produce. Perfect for that adhoc style of cutting and slicing that you will find yourself doing when going through many different types of vegetables in the kitchen.

Masahiro knives are made from one layer of high carbon stainless steel (similar to VG-10). The stainless steel is treated by 3 stages of tempering and quenching to reach a hardness of 58-60 HRC. This makes the knife slightly softer than VG-10 models, but the knife ultimately has a lot more flexibility. You’ll also notice that the Masahiro Santoku Knife feels lighter and much better balanced than similar European style knives.

The asymmetrical edge of Masahiro knives offers its most prominent feature. Asymmetrical edges are 35% thinner than knives with a 50/50 edge; making Masahiro’s knives sharper than other Japanese knife brands. This gives the cook or chef better control over the direction that the blade will follow, especially when performing delicate low-pressure cuts.

An absolute joy to use. You’ll find yourself prepping large quantities of veggies with little effort. The cutting edge of the Masahiro Santoku Knife is on the front side of the knife, which gives you the power to make more precise cuts. The tip of this knife is more than perfect for cutting small vegetables and turning them into thin strips.

The handle is made from a moisture-resistant resin, which is much more practical and longer-lasting than a typical laminated wood handle. The handle is riveted and smooth. The handle also has antibacterial properties which keep it hygienic in its daily use. The handle’s 3 rivet design uses a very wide full tang (almost as wide as the handle itself); enabling an incredibly smooth rounded handle that feels great in your hand as you slice & dice. 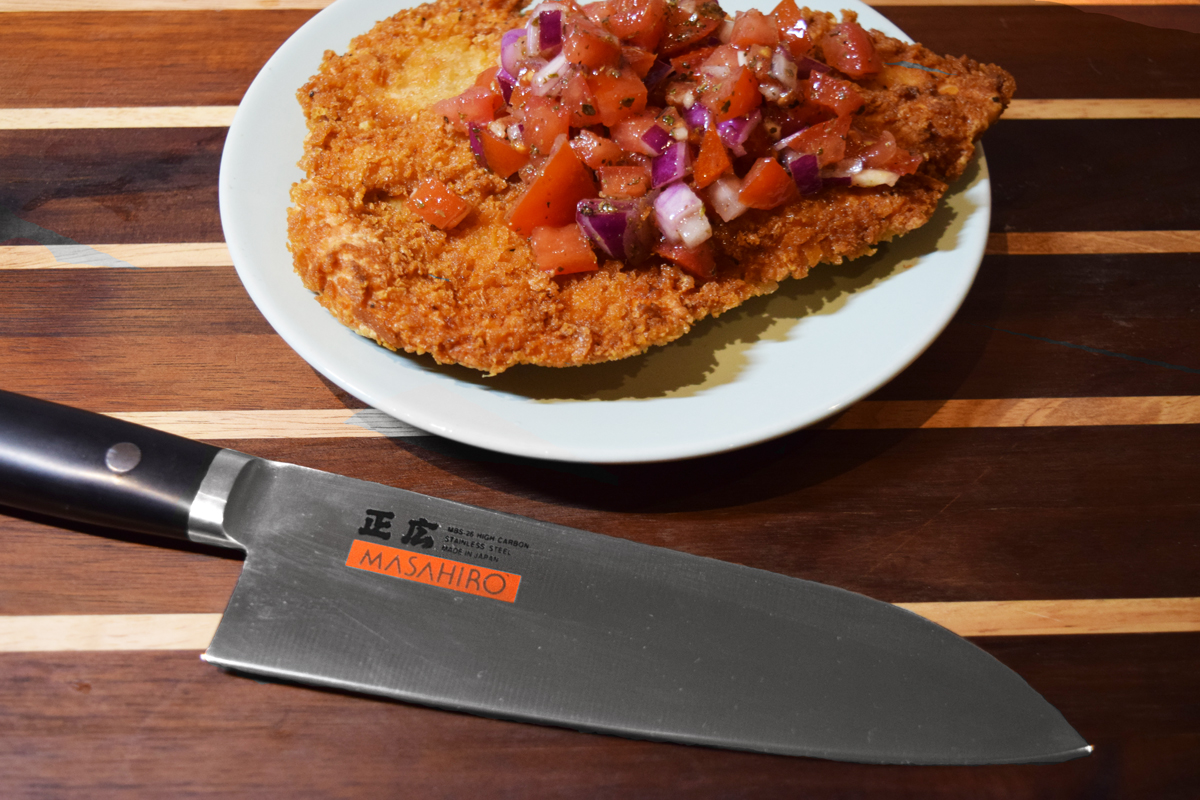 Article Name
Recipe: Cotoletta
Description
Today we dive into the recipe of the chicken variation of the cotoletta. A famous dish from the Lombardy region of Italy, and a symbol of their regional cuisine. Originally made from veal loin, the recipe has come leaps and bounds since its inception.
chickenMasahiro KnifeMediterraneansaladSantoku